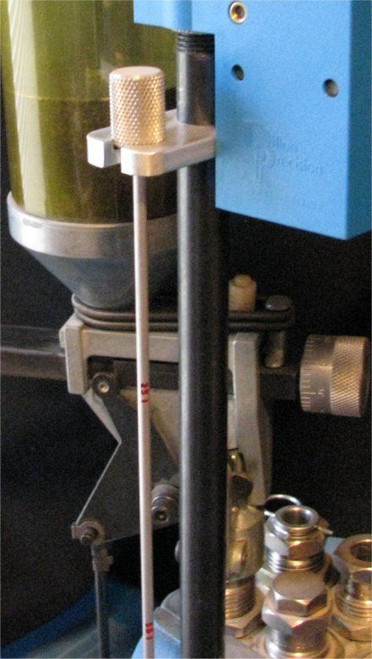 Ever wonder roughly how many primers are left in the primer tube? Ever have problems with the primers feeding because the rod was to light and couldn't "push" the primers all the way down? This Primer Rod takes care of both of those problems.

Primer Count Indicators
This Primer Rod has lines at 100 primers, 75 primers, 50 primers and 25 primers and is accurate to ±1 primer. You will always know about how many are left in the primer tube. NO MORE GUESSING!

Positive Primer Feed
The Primer Rod is made from aluminum and weighs 0.52oz – just enough more than the original (0.22oz) to give positive primer feeding, even when the primer count gets low.

Works with Dillon Primer Alarm
This rod is the same length as the original black plastic rod, so it works perfectly with the Dillon primer alarm.

Primer Rod Holder
Also included is a Primer Rod Holder, so when you load primers into the tube, you have a convenient place to hang the Rod. CNC machined from aluminum. Just clamp it onto the Primer Housing immediately below the Dillon primer alarm. *

Fits Most Dillon Presses
Although the photo shows the Primer Rod and Holder installed on a Dillon RL 550B press, it can be attached to the primer feed tube on the Squared Deal 'B', RL 550B, XL 650, RL 1050 and Super 1050 presses.